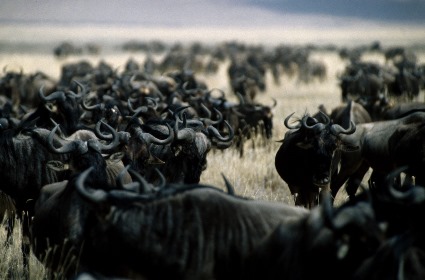 Kenya is Africa's most popular safari destination and it's capital Nairobi is East Africa's economic hub. Kenya has a decent tourist infrastructure and lots of resorts along its coastline. It's a testament to the country's many natural attractions that tourists continue to visit despite being under the official Travel Warning list in several countries including the US.

Kenya was a British colony in the pre colonial times. Today, none other country in Africa can match the sheer range of scenery and Landscapes. It has a great variety of Wild animals and birds. This is the magic of Kenya .

Kenya is the heart of safari company country and a trip through a few of its spectacular parks and reserves is a memorable experience. Breathtaking sights include millions of wildebeest on their annual migration between August and October and equally large numbers of pink flamingoes massing on the shores of the Rift Valley soda Lakes. For sheer majesty it's hard to beat the sight of a herd of elephants crossing the plains with Africa's most famous mountain, the evocative snow- capped Kilimanjaro on the back drop.

Get off the beaten track on a walking safari, a camel safari, or on horseback. You can even freewheel down the Great Rift Valley on a mountain bike. There are a thousand species of birds to spot, 59 National Parks and reserves to explore, trails to hike, mountains to climb, golf holes to eagle, trout to catch and people to meet.

After all this activity in the bush, what a contrast to let go and relax on a white sand , palm fringed beach besides the clear blue water of the incomparable Indian Ocean. If you have energy to spare you can sail , catch a marlin, surf a wind, learn to scuba, or simply goggle at the remarkable coral reefs and tropical fish in seven marine parks.

Those seeking more energetic pursuits will find no shortage of challenges - Kenya has some excellent mountains to climb, especially the popular Mt. Kenya with its unusual alpine flora, the Kilimanjaro and the much less visited Mt. Elgon in the west of Ugandan boarder.

Excellent air connections with Europe , Asia and else where in Africa make Kenya the ideal place for a short visit, or the starting or finishing point for a longer sojourn in Africa.
Either way Kenya has it all-don't miss it. You have to see it to believe it.
Location: Kenya is located in Eastern Africa, bordering the Indian Ocean, between Somalia and Tanzania, see map.
Area: 582,650 sq km, (slightly more than twice the size of Nevada or similar in size to France).
Capital City: Nairobi
Population: Around 32 million people live in Kenya Language: English (official), Kiswahili (official), as well as numerous indigenous languages.
Religion: Protestant 45%, Roman Catholic 33%, indigenous beliefs 10%, Muslim 10%, other 2%. A large majority of Kenyans are Christian, but estimates for the percentage of the population that adheres to Islam or indigenous beliefs vary widely.
Climate: It's generally sunny, dry and not too hot for most of the year in Kenya despite being situated on the equator. The main rainy seasons are from March to May and November to December but the amount of rainfall varies year to year -- more details on Kenya's climate.
When to Go: January - March and July - October for safaris and beaches, February and August to climb Mount Kenya. More about "Best time to visit Kenya"...
Currency: Kenyan Shilling, click here for a currency converter.
Kenya's Main Attractions:

Masai Mara Game Reserve: The Masai Mara Reserve is the most popular wildlife park in Kenya. From July - October you can witness the incredible migration of millions of wildebeest and zebra. The Maasai tribesman also offer cultural tours which really add to the experience. More about Kenya's other excellent wildlife parks and reserves
Mount Kenya: Mount Kenya is Africa's second highest peak and like Mount Kilimanjaro in Tanzania, you don't need special training to reach its summit. The area is home to rare species of animals as well as spectacular lakes, mineral springs and forests.
Lamu: Lamu is one of Kenya's oldest towns, settled by the Swahili about 700 years ago. More recently discovered by backpackers, Lamu is a great place to unwind and wash off the dirt and grime accumulated from some hard traveling. No matatus or mini-buses here, just donkeys and the sound of the ocean waves.

More Information about Kenya's Attractions ...
Travel to Kenya
Kenya's International Airport: Jomo Kenyatta International Airport (Airport code NBO) lies 10 miles (16 km) south east of the capital city, Nairobi. Mombasa's Moi International airport accommodates flights from Europe as well as charters.
Getting to Kenya: Many international airlines fly into both Nairobi and Mombasa direct from Europe and the Middle East. Long-distance buses ply routes between Kenya, Uganda and Tanzania, more about Getting to Kenya.
Kenya Embassies/Visas: Most nationalities entering Kenya need a tourist visa but they can usually be obtained at the airports, check with the Kenyan Embassy before you go.
More Kenya Practical Travel Tips
Kenya's Economy and Politics

Economy: The regional hub for trade and finance in East Africa, Kenya has been hampered by corruption and by reliance upon several primary goods whose prices have remained low. In 1997, the IMF suspended Kenya's Enhanced Structural Adjustment Program due to the government's failure to maintain reforms and curb corruption. A severe drought from 1999 to 2000 compounded Kenya's problems, causing water and energy rationing and reducing agricultural output. In the key December 2002 elections, Daniel Arap MOI's 24-year-old reign ended, and a new opposition government took on the formidable economic problems facing the nation. After some early progress in rooting out corruption and encouraging donor support, the KIBAKI government was rocked by high-level graft scandals in 2005 and 2006. In 2006 the World Bank and IMF delayed loans pending action by the government on corruption. The international financial institutions and donors have since resumed lending, despite little action on the government's part to deal with corruption. Post-election violence in early 2008, coupled with the effects of the global financial crisis on remittance and exports, reduced GDP growth to 2.2% in 2008, down from 7% the previous year.

Politics: Founding president and liberation struggle icon Jomo Kenyatta led Kenya from independence in 1963 until his death in 1978, when President Daniel Toroitich arap Moi took power in a constitutional succession. The country was a de facto one-party state from 1969 until 1982 when the ruling Kenya African National Union (KANU) made itself the sole legal party in Kenya. Moi acceded to internal and external pressure for political liberalization in late 1991. President Moi stepped down in December 2002 following fair and peaceful elections. Mwai Kibaki, running as the candidate of the multiethnic, united opposition group, the National Rainbow Coalition (NARC), defeated KANU candidate Uhuru Kenyatta and assumed the presidency following a campaign centered on an anticorruption platform. Kibaki's NARC coalition splintered in 2005 over the constitutional review process. Government defectors joined with KANU to form a new opposition coalition, the Orange Democratic Movement, which defeated the government's draft constitution in a popular referendum in November 2005. Kibaki's reelection in December 2007 brought charges of vote rigging from ODM candidate Raila Odinga and unleashed two months of violence in which as many as 1,500 people died. UN-sponsored talks in late February produced a powersharing accord bringing Odinga into the government in the restored position of prime minister.